All high-rise, low-rise and street developments in the Adelaide and North Adelaide areas.
Post Reply
3751 posts

There's a bike crossing there that joins the bike path in the Western parkland and is already a popular route for cyclists. The other criticisms are definitely odd, but that part makes sense.
Top

Yeah, I don't have any issue with the dead end at West Tce. It's a signalised intersection, and can lead straight into the parklands. Perhaps they can improve the paths from there to feed into and out of both Sir Donald Bradman Dr and Glover Tce.
Top

Looks like RCC will be returning to Victoria Square after a troubling run at Adelaide Uni. It has different owners to when last in the the square, so I wonder if that's helped overcome the nitpickers among the elected members who chased them out last time. Consultation here: https://yoursay.cityofadelaide.com.au/r ... ntanyangga
Keep Adelaide Weird
Top

So council is pressing ahead with the bike lane dogleg route, and I was correct that it's to avoid pissing off someone, namely a bunch of law firms on Flinders St who threatened to sue the council if they lost street parking spaces outside their properties.

The council needs to grow a backbone and tell them to fuck off. The roads and street parking are public space and owned by the council, and these firms have no more right to them than anyone else.

Also, fuck the Advertiser who are pitching it as the number of carparks that are lost and highlighting sections as "the worst hit areas".

The proposed route of a $5.8m Adelaide CBD bikeway has been designed as a dog-leg to avoid potential legal action by business owners.

Staff have suggested the much debated East-West Bikeway should go from West Tce along Franklin Street into Flinders Street, then into Gawler Place and on to Wakefield Street.

The preferred design – presented to elected members on Tuesday night – avoids cyclists going past several businesses on Flinders Street, including law firms, which threatened to sue the council if they lost parking spaces outside their properties. Instead cyclists will have to make right turns from Flinders and Wakefield streets into Gawler Place, which will be converted from an one-way street for vehicles into shared two-way use by bicycles.

Staff have ruled out three other possible routes to connect West Tce with South Tce by putting bike lanes and cyclist crossings on Grote Street to Wakefield Street, Franklin Street to Flinders Street or Waymouth Street to Pirie Street.

All angle parking along the route will be replaced with parallel parking, resulting in the loss of 170 spaces near small businesses, three hotels, two schools and two churches.

One of the worst hit areas will be near the intersection of Franklin St and West Tce, where the Greek Orthodox Church and St Mary’s College will lose between 60-80 car parking spaces.

A staff report said the council already had been granted two time extensions and would have to seek another to enable consultation to occur and design work to be completed.

“The Department for Infrastructure and Transport advised that a further extension of time may be possible under certain circumstances,” it said.

“These circumstances may include a requirement that construction works have substantially commenced. Discussions are ongoing.”

The staff report suggested the project could be expedited if the council limited consultation to telling property owners about the bikeway’s impact on street parking, then complete final designs and start construction before June.

“(Council would then) undertake a broad engagement process once the bikeway is in place to proactively gain feedback from all street users and stakeholders,” it said.

“(There would) be ongoing feedback loop to make adjustments to the bikeway as needed.”

Cr Anne Moran said the council had chosen the route because it had succumbed to pressure from businesses on Flinders St, including law firms.

“I know why we are doing this and it has nothing to do with what staff are saying,” she said.

“It is because of intense political lobbying.

Lord Mayor Sandy Verschoor agreed the proposed route had been chosen to avoid Flinders Street “because the lobbying was so intense”.

Ms Verschoor expressed concern about the lack of consultation, saying it appeared only stakeholders losing car parking would be involved.

“I’ve already had calls from people who aren’t talking about the route, it is more the fact nobody has spoken to them,” she said.

Asked by Cr Alexander Hyde if it was a case of “choose first and ask people what they think later”, chief executive Mark Goldstone told the meeting broader consultation would delay a start to the project – and threaten the grant money.

“There hasn’t been a wholesale engagement process undertaken because this is the only way to achieve the delivery of the project within the timeframe,” he said.

“The last time we asked for an extension there was commentary around that we really needed to get on and deliver the project.

“We have identified the route, we have determined it is the most appropriate and we will be moving forward with that route.

“We will consult as we progress with the design.”

Elected members have been asked to approve the route at the council’s next monthly meeting on December 15.

Council should save themselves $5.8m and scrap the bikeway plans. This is such a half arsed attempt. Do it right or don't do it at all.
Any views and opinions expressed are of my own, and do not reflect the views or opinions of any organisation of which I have an affiliation with.
Top

What am embarrassment for the ACC.
Federal govt: "Hey we'll fund an East/West separated bikeway - all you have to do is select a route and pay for the design work."
ACC: Duur. :

(In particular the Dep.LM "I hate cyclists so I'm going to do everything in my power to frustrate this process damned if those lycra clad hooligans are going to get something out of a Council I'm on.
Big infrastructure investments are usually under-valued and & over-criticized while in the planning stage. It's much easier to envision the here and now costs and inconveniences, and far more difficult to imagine fully the eventual benefits.
Top

They should name and shame the businesses threatening to sue council over the provision of on street car parking, so that I and everyone I know can avoid ever spending a single cent at their business.
Top

This revised proposal is a joke.

Why does everything to do with the Adelaide CBD come back to on-street car parking?

Adelaide CBD has more car parking station spaces available than either Sydney CBD or Melbourne CBD, why do people still expect on-street parking immediately at the front of the CBD business they are visiting as well? The stretch of Flinders Street in question has up to a dozen car parking stations within 200m of the street.

The same stretch of Flinders Street has up to a dozen legal firms, and these are the real culprits in this sorry saga – who in the hell do they think they are to threaten legal action against the ACC for losing on-street car parking? They don’t own the street, The ACC needs State Govt backing here, and call their bluff, take the original Flinders-Franklin proposal back to the preferred option and open it to public consultation as per proper process.

This all goes back to a disjointed transport plan for the CBD, what supposed to be in planning is:

And what is the use of Infrastructure SA? And where are they, not only in this saga, but on all the items above? So far their reports released to date have just been regurgitation of previous information.

PT, cycling , walking - all the things needed to operate smoothly in a modern city, and here we are still thinking like its half a century ago with on street car parking.
Top

What a crock of shite.

ACC have failed massively on this one. Embarrassing. 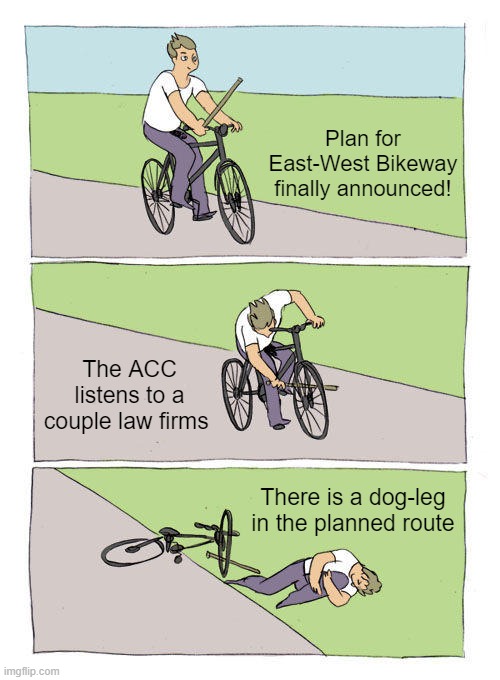 Our state, our city, our future.

All views expressed on this forum are my own.
Top

mshagg wrote: ↑
Wed Dec 09, 2020 8:32 am
They should name and shame the businesses threatening to sue council over the provision of on street car parking, so that I and everyone I know can avoid ever spending a single cent at their business.

Sadly the law firms which would make those threats would probably also be happy to cause difficulties based on any such action.

However it is nice to know that if ever looking to find a street park during the day in town the place to try and take them is on Flinders Street.
Top

Nice of the Lord Mayor to admit the lobbying, but it's a bit pathetic to blame the administration for minimal consultation rather than the elected members who've obstructed this every step of the way. It'd be nicer for her to face down the naysayers and actually show some leadership on the issue, as is supposed to be her role! Honestly, with her background in the arts, I thought Sandy Verschoor would be a stronger advocate for a more progressive city. Perhaps she should take a trip to Sydney and learn something from Clover Moore.

Also, I'm confused how this is only costing $5.8m when the state has $12 million on the table and it's a huge stretch of road.
Keep Adelaide Weird
Top

Disappointingly the bicycle interest groups are encouraging members to offer vocal support for the proposal (the fatally compromised design they've come up with isn't even guaranteed to pass at council).

What a terrible precedent to establish, as if ACC wasn't already beholden to on street car parking.
Top

mshagg wrote: ↑
Tue Dec 15, 2020 8:22 am
Disappointingly the bicycle interest groups are encouraging members to offer vocal support for the proposal (the fatally compromised design they've come up with isn't even guaranteed to pass at council).

What a terrible precedent to establish, as if ACC wasn't already beholden to on street car parking.

Sadly BikeSA has quite a narrow view of who is a "cyclist", and both their lobbying and their campaigns reflect that.
Top

Council voted against the design.

Sorry, I should say - Team Adelaide voted against the design.
Top

Probably the only sensible thing Team Adelaide has done.
Any views and opinions expressed are of my own, and do not reflect the views or opinions of any organisation of which I have an affiliation with.
Top
Post Reply
3751 posts